Today Candace Walsh, co-editor of Dear John, I Love Jane, is interviewing me about my writing process.  This is going to be fun.

Candace: In How to Sleep Alone in a King-Size Bed, you managed to take the raw material of the emotional mudslide of divorce and turn it into a startlingly beautiful and gracefully honest book. As a magazine editor, I read hundreds of submissions that come from a lot of emotion, but they often stay stuck in the internal monologue blah-blah-blah. How did you discern what to include and what to leave out?

Theo: Thank you, that’s very nice. I think I had three advantages in this area when I was writing King Size: 1) When I started writing the raw material of what later became the opening chapters of the book, I did not think I would try to publish it.  I was writing  just for me.  While my husband and I were separating, a book I wrote about motherhood was circulating around New York.  And circling and circling.  Despite my high hopes and hard work, the book didn’t find a publisher.  I was crushed, but I was also, well I don’t know, let’s say furious. My attitude was I’d been chewed up by the publishing game, and now I’m just going to write something for me, and I wrote with the intention of making the writing just the way I wanted it–with no goal, no audience, no agent, no editor, no buyer in mind. Freed by failure and the certainty no one ever would read my words, I wrote from the heart.  And then, a very long and strange chain of events occurred and the words became a proposal and the proposal sold.

2) Another factor that helped keep the focus of the book tight was the clearly defined topic of the book: Divorce.  My guiding principle was that I would cover what I felt were the universal aspects of my divorce, and if a scene really wasn’t anything to do with my divorce and my recovery from divorce, it wouldn’t make the final cut.

3) I had a great editor: Rachel Klayman at Crown.

Candace: When you teach writing, how do you evaluate the progress of your students? Do you have any guiding principles that you share with every class or individ 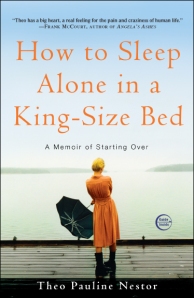 Theo: One litmus test for student progress is the readability of their work.  When they turn pieces in that I can’t put down, I know something’s working.  But of course, some students start off with that fiery quality and then what I look for is how close they’re coming to what they’ve described to me is their vision for the work and what seems to be their voice.  I also look for technical improvements: Are they developing scenes with a strong narrative arc?  Are transitions clear?  Are chapters coherent?

However, it takes a long time to improve as a writer. Years. It’s not something we want to accept when we’re first starting out, but you do have to be willing to slog away for a quite a while before you see a substantial change.

I am always a bit ashamed that I don’t have a true writing routine.  But I have phases of routines.  When my kids were little, I would get up at 5:30, creep out of the house like a bank robber, and steal off to a cafe and write for an hour and a half.  Then, a few years later, I was divorced and my routine was: Get them off to school, collapse with exhaustion and moan how really I can’t be expected to do anything more than I’m doing, then get up, shake myself off and head to a cafe for a writing session.  My favorite phases for writing are when my kids are at their dad’s for a stretch. Then, I can come and go from the writing all day long.  Write a little, go for a walk, write a little, do dishes, write a little, take a nap.  I guess the key words here are “write a little.” Average writing session for me is one hour.  I know there are folks out there doing long stretches and I wish I were one of them, but everyone has to work with who they are.  So often we beat ourselves up because we’re not like Hemingway (writing everyday) or we can’t do marathon sessions or we don’t have a strict writing schedule, but that beating ourselves up leads to LESS writing, not more.

Candace: I think writing is an act of bravery. Do you feel that way? If so, how do you psyche yourself up to do it? 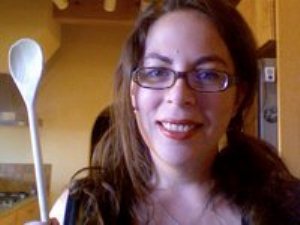 Theo: I absolutely agree, which is probably why I have such a shaky writing routine.  I’m not always up for the task of showing up at the page.  I don’t know if I really psyche myself up, per se.  I seem to make the time to do things–anything, but especially writing–when I want to do them.  So if I’ve gotten excited about writing a particular scene or trying to express a certain experience, then I’m galloping over to the page.  But I’m not very good at making myself do things.  In fact, I’m terrible at it.

Candace: The world of publishing is changing so radically, and has already shifted so much in the last 10 years. Do you feel like these changes (social media, self-publishing, e-books, blogging) are beneficial to writers, or a hindrance, or a combination?

Theo: I think that the advent of social media has made the job of building a platform and an audience much easier.  When my book came out in hardback in Spring 2008, I had the typical experience of having a rather modest amount of media events, reviews, and promotion generated by the publisher’s publicist.  It was a time (It’s weird to talk about 2008 as “a time,” but things have changed since then) when publishers had cut back what they had to offer and there was this general consensus that the writer needed to be creating their own buzz yet instructions on how to do that were fuzzy. I was willing to do my part but wasn’t sure what to do. I started a blog, but you’d have to happen by website (which why would you if I’m an unknown, first time author) to find it.  I posted it on Amazon, thinking I’d draw a huge readership but that never happened.

And then–parting of the clouds–Facebook came into my life, just in time for my paperback release.  I was already on Facebook, but I never logged on, and I certainly hadn’t thought of it as a way to connect with other writers and promote my work. But, then I had the idea of writing to writers I admired and sending them a Friend Request (this is in the Pleistocene Age, before fanpages).  After not too long a time, I’d built up a community of writers, and I started seeing what they were up to.  They were promoting their readings, they were posting reviews, they were linking to blog posts.  And, then they were doing something called Twittering.  Like many other times in my life, I’ve copied what the big kids were doing and it’s been pretty successful.

Candace: Tell me about your next book project.

I’m writing a book in the tradition of Goldberg’s Writing Down the Bones, Lamott’s Bird by Bird, Cameron’s The Right to Write: an intimate book about how I came to find my voice as a writer and how others can too.  I’m very excited about it.

Candace: Where can we find you online–other than here, of course?

Author of Writing Is My Drink (Simon & Schuster) and How to Sleep Alone in a King-Size Bed. Learn more about my courses, editing, and coaching at TheoNestor.com.
View all posts by Theo Pauline Nestor →
This entry was posted in Interviews, Memoirists. Bookmark the permalink.