Falling off the Writing Wagon

Who thought there could be so much to say about having nothing to say? Or maybe, it’s having too much to say?  Either way: it’s one more post about block.

Early this past summer, I came to the conclusion that most of my writing students could do really great work if only, they would..well, just do it. But, most of them were writing far less than the amount they reported  that they wanted to write. When I’d run into an individual student, there would be the inevitable moment when her voice would drop to whisper and say something like, “I haven’t been writing,” in the remorseful tone normally reserved for confessing a murder.

And, I wish I could say that I was the teacher who was writing the amount she wanted to write who could lead her students by example out of the darkness.  I’d just come out of a period of six months of writing routinely and regularly, but then something happened and I was off my routine. Once off my routine, it’s as if I’ve never written before, like I wouldn’t even know where to begin.  It’s the same with yoga. As much as I report that I love yoga if I miss a class, I might not be back there for months. And, in fact, during that time, there will be nary a stretch on the living room floor. By the time I decide I must go back to yoga, i will go back to yoga, here I am going back to yoga any minute now, I’ve been rendered into a hunched, crooked figure something like a medieval version of the Grim Reaper. 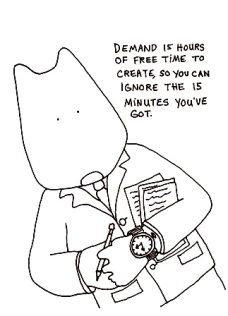 So, of course it occurred to me that while I was helping my students get to the page, I could also be helping myself.  I remembered the Valian essay (I wrote about this essay in the three posts titled Once Upon a Block), and was happy to find it had survived and was still on my shelf. I read it hungrily and the message made as much sense to me as it had 20 years earlier.  I also went back to all my it’s-safe-to-write books: Natalie Goldberg’s Writing Down the Bones, Julia Cameron’s The Right to Write  and How to Avoid Making Art and Anne Lamott’s Bird by Bird. From these readings, I developed a two-week program for getting writers back to the page and did it with three groups of students who mostly reported exhilarating results.  The cornerstone of the program–writing a little everyday– is not astonishing or complex just like it’s not surprising that eating less and exercising more will cause weight loss. But, it’s always the simple stuff we get snagged up on.

Author of Writing Is My Drink (Simon & Schuster) and How to Sleep Alone in a King-Size Bed. Learn more about my courses, editing, and coaching at TheoNestor.com.
View all posts by Theo Pauline Nestor →
This entry was posted in Writers Block. Bookmark the permalink.

5 Responses to Falling off the Writing Wagon